God, or some other celestial force, had other things in mind for me, and my destiny and I collided on a warm summer day in the Year of Our Lord 1685.

Why do you think your parents and your church keep boys and girls apart as long as they do? It’s because they know the power of carnal desire – of the joining of a man and a woman. They have told you that such desire is a sin and preach that the only reason for the joining is to produce babes. But they are wrong. Desire in itself is no sin. And neither is sating that desire. That is, as long as you know how to take care of yourself.”

Maude, the young girl, soon finds love with another boy her age but something seems to go wrong when an old stranger with young, piercing eyes comes to visit Imelda, the old woman. Imelda tells Maude to stay clear of the old dude but hey, it’s all about breaking those boundaries.

The Turning is more of a sexual and mental awakening of a young Puritan maid than it is about witchcraft. It’s OK but quite short and I soon realised why – there’s an entire series and I just happened to go to the first one. 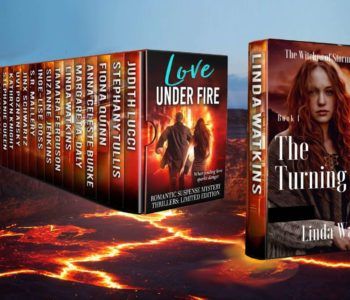 Maude is made to marry a local man who pays little interest in her and soon after her young one is born, the mysterious old man re-appears and starts the very easy process of seducing a bored housewife and teach her the ways of magic.

Without another word, his pressed his fingers to my flesh and I could feel white-hot energy flowing from his hand into my mind. Incantations, old as the earth itself, began to tumble into my brain, one after another, until I thought my head would burst open like a ripe melon.

The witch hunts intensify in nearby Salem and Maude starts running. Her husband is shot dead and soon after, the merry widow marries her one true love in a feast filled with singing and other wedding games. Soon she’s pregnant again and all this happiness does not seem to end (until the author throws a bit of a spanner into the works)

They had burnt them.

Burned my friends who were no more witches than their accusers were. Burned women who healed selflessly, who brought babies into the world safely, who nurtured and honored the land and its bounty. I sunk to the floor, tears streaming down my cheeks. How had everything we had worked for been destroyed in one day? What kind of God would do this to His people?

The book ends on a little clifhanger with Sarah, the second child, possibly having inherited the witchy blood of her mother, after the old man turned her. They’re a happy family now, out in the open, husband knowing full well that his wife is a witch and still loving her.

All in all, I kinda breezed through this book and nothing appeared to hold my interest too long. Forgettable fiction I call it but good for the 1h it entertained me.

Later, I slipped from the bed and made my way to the kitchen where I brewed a cup of tea, stirring in a packet of the powder that would prevent a baby from quickening in my belly. The joining had been unsatisfying, almost clinical in nature. My husband, I feared, was not a passionate man. In fact, he called it his “duty” and strove to get it over with as quickly as possible. He did not kiss or cuddle me and, afterward, simply rolled over on his side and was instantly asleep.

Sitting, now, in the cold kitchen, I relived in my mind the times Micah and I had joined, wishing that I had to power to call him to me so I could once again feel the warmth of his love.

I stoked the fire, putting on another log. This sham of a marriage, I now believed, was God’s punishment for my sins. I was wed to a cold man and there would be no more passion in my life.

Well, I will make the best of it, I told myself. The babe, Samuel, I will raise as my own. And, the farm is large and prosperous. Perhaps, I can convince Josiah to let me begin an herb garden from which I can produce recipes for elixirs and remedies as I did when apprenticed to Imelda.

Yes, I will make the best of this life and know that I had once been blessed with a love the likes of which most people never experience.

My thoughts were interrupted by Samuel’s cries. Quickly, I finished my tea, wrapped my shawl around me, and hastened to the bedroom. Lifting him from his crib, I walked back to the kitchen, cradling him in my arms, rocking him back and forth.

Smiling down at the child, I knew I would extract a measure of pleasure from the life I had been cursed with. Samuel, this sweet babe, I would make my son.